'The team, all seemingly comfortable just bouncing off one another, follow any random idea to its logical (or illogical) conclusion.' - Keeping Up With NZ

'Snort has tapped into an entirely new audience potential. The balance of Snort regulars versus Snort virgins is almost perfectly half and half each every week, thanks to both word of mouth and walk-ins. It’s obvious that Snort has had, and will continue to have, a long life...' - Theatrescenes

'These are some NZers that we would be happy to claim as our own.' - Squirrel Comedy (Australia)

'An energetic and witty venture into absurd improv comedy.' - The Music (Australia)

Every Friday night, the lights get low and something magical happens at Basement Theatre in Auckland's CBD.

At 10pm, a ridiculous group of humans, made up of NZ's best young comedians and actors, take one word from the audience and build an hour of high-stakes comedy drama.

Based on a popular format that started at the Upright Citizens Brigade by Tina Fey and Amy Poehler, Snort is a comedy show that’s different every single time you see it. The audience offer a word, a cast member or occasional special guest offers a monologue, and then the cast launch into a series of improvised scenes inspired by the word and monolgue. 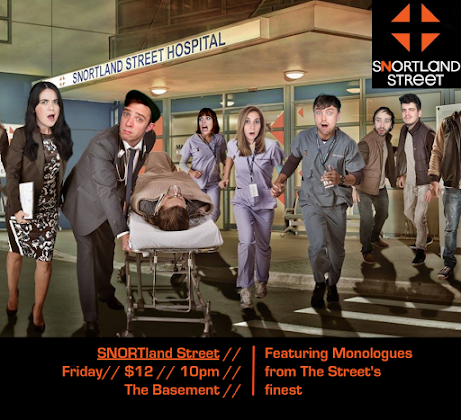